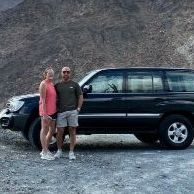 Thought I would start post to track my LC Project. I have only made one drive in the desert but have done a lot of work on my old LC. The plan is to continue replacing and upgrading things until I bri

Been stuck in US since November but finally back just in time for nice weather. Parts made it through checked luggage and customs :).  WI'll start adding parts next week. So far only had time to

Little more progress. As all projects go, it's turning out twice as big as predicted, much higher cost, and plenty of unforseen problems. Have to remember the journey is more rewarding then the