Solar Park: Left or Right? - Drive Report I know you are tired, but come, this is the way - Rumi Spectacular drive, a notch up from Newbie Level, both in terms of skills as well as duration.

Dear Desertnauts. A couple of very short notes, prior to this Saturday's Left or Right drive. First, there is still 2 open spots in the drive roster: anyone who feels like joining (@Naim Aou 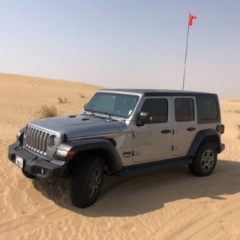