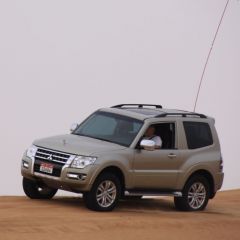 By Warren Flay,
June 21 in Mitsubishi Pajero Forum in UAE